skip to main | skip to sidebar

Leonard Pitts Jr.: History will judge
And I hope Bush is still around to hear the verdict
Friday, January 16, 2009
"History. We don't know. We'll all be dead."
-- George W. Bush
Dear President Bush:
I am glad you are, at 62, still a relatively young man. I am glad you are in robust health. This means there is a good likelihood of your being with us for decades yet to come, and I dearly want that. You see, history's verdict is on the way, and I want you to see it for yourself.
We've been hearing the "h" word a lot from your surrogates, your supporters and you as you make your final rounds before handing over the keys to the new team. History, we are told, will render the truest verdict on your time in office. History, it is implied, will say you were a far better president than we ever gave you credit for.
You said it again Monday in your farewell press conference. History will have the final say.
It is a curious position for someone who has been, as the quote above suggests, rather dismissive of history's judgment. It occurs to me that, as patriotism is the last refuge of the scoundrel, so history is the last refuge of the failed president.
But you and yours keep returning to it, reminding us how Harry Truman left office not much more beloved than you are now, but history took another look and decided he was a better president than anyone thought at the time. Frankly, the very fact that you and your team repeatedly invoke the 33rd president in defending your legacy is rather telling.
That's not a defense, it's a Hail Mary pass. It's hoping against hope. Truman enjoyed an extreme makeover, yes. Most presidents do not.
Yes, history does refine our initial assessments of a given president. But those refinements usually move in increments.
You would need more than increments of movement, sir. You would need a football field. I don't see it happening.
Credit where it's due: you were the best U.S. president Africa ever had. Your work to reduce AIDS rates on the mother continent never got as much attention -- and praise -- as it deserved.
But there the list ends: I find it impossible to think of another praiseworthy achievement. The failures, though, rush readily to mind: Katrina, Abu Ghraib, Justice Department scandal, torture, Iraq War, Social Security, immigration â€¦ You leave a legacy of regression and division, and a nation worse off by multiple measures than before you took office.
But you know what, sir? That's not even the worst of it. No, the worst is the way you turned our government into a wholly owned subsidiary of the Republican Party, the way you disdained objective truth in favor of ideological fiction, the way you treated dissent as disloyalty, the way you repeatedly poured sewage on our heads and swore it was water from a mountain spring.
So yes, I'm happy you'll likely be around 20 years from now. Because, contrary to what you seem to think, it doesn't take centuries to get some initial sense of history's verdict. That takes about a generation. Meaning that when history weighs in on your presidency, you'll probably be here to see it. And I don't think you're going to like it.
Yes, I'm stepping out on a limb here. The future is, by definition, unknowable. But it is simply inconceivable to me that history will judge you anything but harshly. Frankly, I think it will judge us all that way, will marvel at the things we let you get away with, the principles Americans can betray, when they are scared.
As with the internment of the Japanese during World War II, and the McCarthy excesses of the 1950s, I think fear will be the defining statement of this era. Fear, and the terrible things we did, condoned and became as a result.
Godspeed, then, Mr. Bush. Good health and long life. I hope you live to hear history itself tell you what an awful president you were.
Leonard Pitts Jr. is a syndicated columnist for the Miami Herald (lpitts@miamiherald.com).
First published on January 16, 2009 at 12:00 am
Posted by dad at 11:54 AM 1 comment: 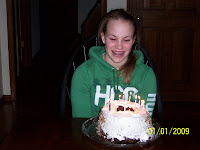 We travelled west on Dec.29th and arrived in time for a nice lunch with Erik and Bryan. Spending two lovely days with the Wheaton Sanzottis, we celebrated Hayleys 15th BD and the beginning of 2009. We all have high hopes for better times in the coming year. By Jan.3rd we were safely in Butler, deeply into snow removal and Xmas put away. We are now looking forward to looking after the B-man in SC and then leaving this deep freeze for sunny Florida.
Try to find time to wish little Nana happy birthday! She is Ninety-nine on January 15th.
Love you all
Posted by dad at 4:48 AM 1 comment: